March 17th is widely known as the day where we celebrate the Irish heritage with song, dance and of course, drinks. From whisky to baileys spiked coffee and, if you’re celebrating in North America, green beer! It’s safe to say that March 18th wins the title of National Hangover Day.

But what if we told you that celebrating the patron saint of Ireland with tasty beverages didn’t have to hurt the next day (or your wallet, for that matter)? Keeping with the tradition of all things green, we have created a list of better-for-you alternatives that are free of booze and questionable green dyes. Cannabis and chlorophyll to the rescue in our recipe below, but first, a bit of background.

While green beer is not a ‘thing’ in Ireland, it’s sure made a splash in North America – namely Montreal Qc, which was officially marked as Dublin’s Canadian sister city in 2016. The bilingual crown jewel of la belle province became home to more than 600,000 Irish settlers by 1850. Each year, Montrealers would make their way downtown along Sainte Catherine street to celebrate and for the past 200 years, for just one day, everyone is at least a little bit Irish.

While chemical-based dyes are not ideal, all-natural substitutes can complement the benefits of alcohol-free drinks replaced with, umm, greener alternatives. Here are two delicious recipes to enjoy in honour of Saint Patrick 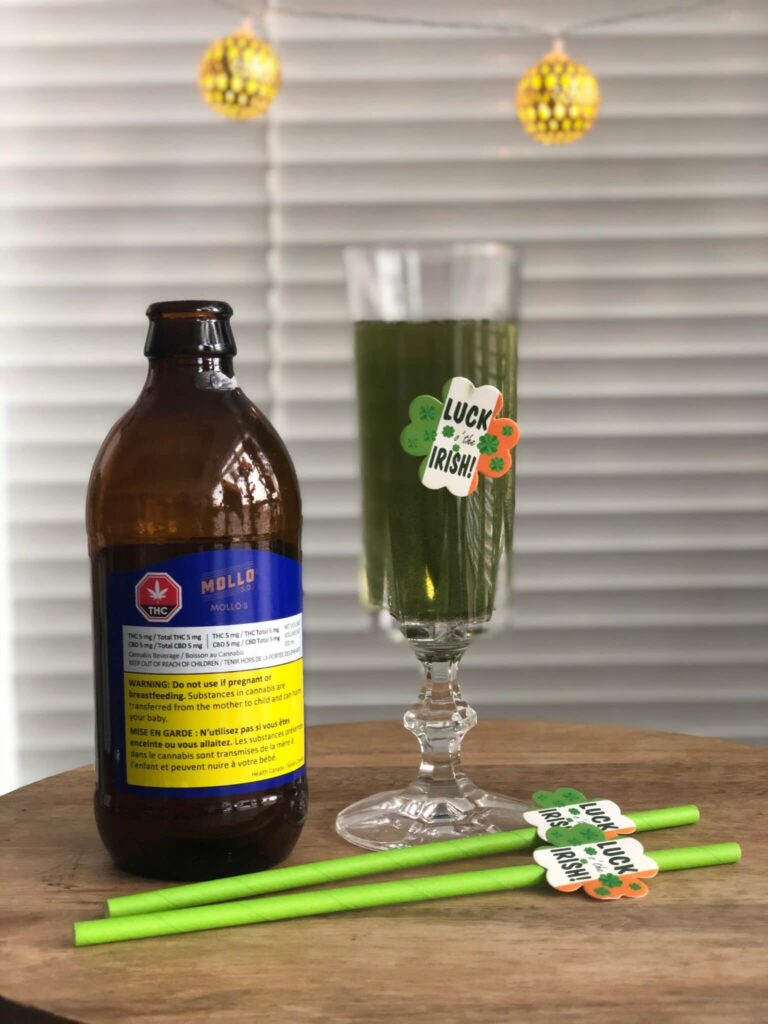 Ingredients are simple with this one. All you need is a bottle of Mollo and a few drops of Chlorophyll.

Directions
Pour the Mollo into a frosted glass at a 45-degree angle.
Add 2-3 drops of chlorophyll and stir until blended.
Level up by garnishing with festive accessories.
Drink responsibly!

Perhaps you don’t enjoy the taste of beer and prefer something comforting and tasty on the sweeter side. This hot white chocolate with matcha bevy is a timeless classic reinvented as a wholesome, tasty CBD-dominant treat when paired with dissolvable crystals.

Cozy up with this antioxidant & cannabinoid-rich slightly elevated take on an old comfort classic.

Boil water in a kettle and add matcha powder to an empty mug.
Heat oat milk in a pot on the stove and add white chocolate. Stir frequently until melted.
Once the water has boiled, pour over matcha powder and whisk with a mini whisk or a handheld frother. Once evenly mixed, add to the pot, stirring for 30-45 seconds continuously.

Pour into mugs and add marshmallows if desired. Enjoy!